Enchanting experiences created by The Imagination House beautifully highlighted by LD Susan Rose
When visiting the Smoky Mountains of eastern Tennessee a visit to Dollywood should be high on anyone’s agenda. The popular theme park debuted a new land in June 2019 – Wildwood Grove – at whose heart is a magical Wildwood Tree illuminated using Elation Professional luminaires with lighting design by Susan Rose.

The Wildwood Tree comes to life each evening during a unique light and sound experience created by The Imagination House for Dollywood and narrated by Dolly Parton herself. Designed and built by LifeFormations, the 50-foot tree’s gnarled trunk emerges from a rock base before spreading into a beautiful green-leaf canopy covered with 650 custom RGB LED butterflies, controlled and programmed by Weigl Controls. 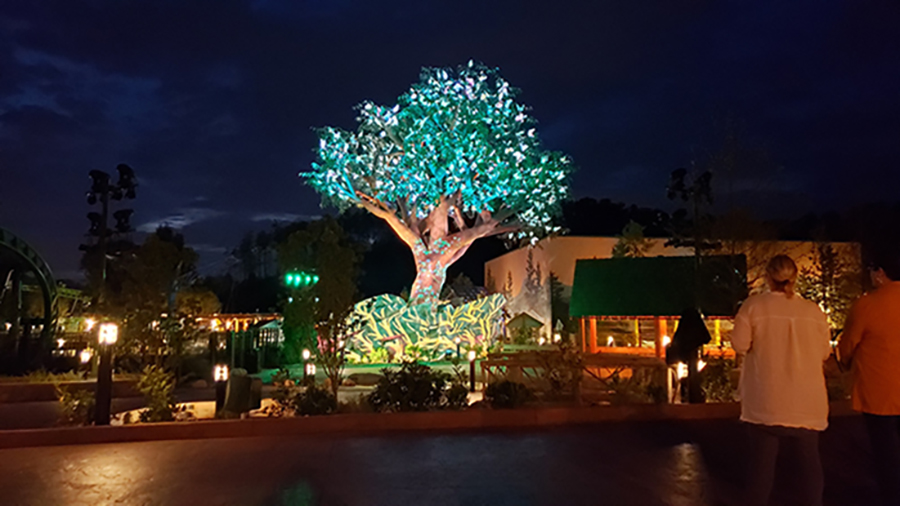 IP65 and bright
Lighting designer and lighting programmer for four separate seasonal experiences is local resident Susan Rose. She has previously designed lighting for Dollywood shows and spent nearly a year on the Wildwood Tree project. “When I started on the project the tree didn’t even exist yet so we really started from the ground up,” Rose comments, adding that she was given a sample piece of the tree trunk to see how light would react on it. Bandit Lites also got involved in the project early on, she says, and were critical in setting up demos and helping her look at the various lighting possibilities. “I knew we needed outdoor-rated lights to fight with Mother Nature and we needed something with good intensity to shine through at dusk. Bandit recommended we go with Elation and as I was already an Elation fan and it was also in our budget range, I took a closer look.”

Four experiences
Each season of the year features a captivating new Wildwood Tree experience for guests with narration accompanied by music and light projection onto the tree in concert with the color-changing butterflies. As the Wildwood Tree is a 360-degree experience, Rose positioned lighting fixtures on four poles to illuminate the tree from all four sides. Mounted on each pole - each pole is at a different throw distance - are four Proteus Maximus™ LED profile moving heads, four SixPar 300™ LED Par lights and four LED lekos. The SixPars splash an array of color onto the rock base, tree trunk and canopy while the 50,000-lumen Maximus units project custom gobos onto the tree to enhance story telling through custom patterns and animations.

Gobos
Each Proteus Maximus fixture houses custom gobos with a few stock gobos also in use. Rose says that specific gobos play a key role in the storytelling – butterflies, lightning, dragonflies, Christmas ornaments, snow or leaves that fall down from the top of the tree – and needed to be indexed properly. A complex programming challenge, Rose says that she really had to put a lot of thought into the gobo load in the four Maximus lights. “The gobos really tell a story on this and are quite important. I really had to put some thought into which gobos go into which wheel and what slot, which ones needed to index and which ones could go on the static wheel, keeping in mind how I could create transitions.” Multiply that by four shows and you can understand the complexity. “It was probably the trickiest programming I’ve done in a long time,” she said, “but it came out nice. The crispness I could get out of the focus and zoom with the gobos was fantastic.” 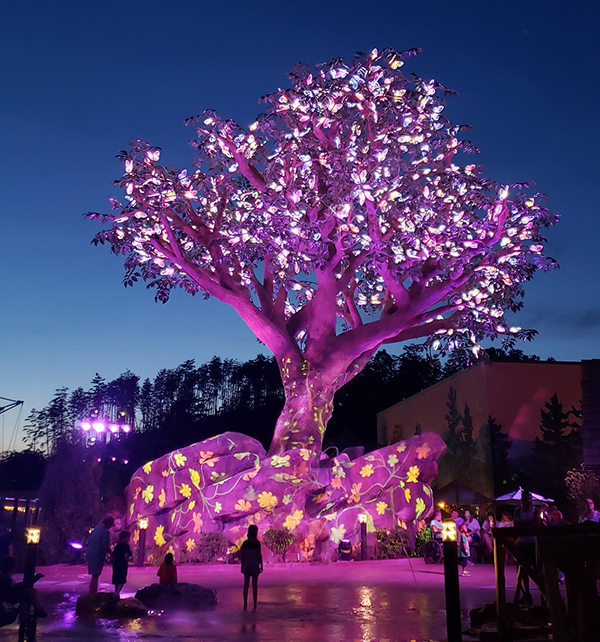 Rose was one of the first in the U.S. to use the Proteus Maximus and although the fixtures were new to the market, she says they have performed well. “I’ve been really impressed with the optics. Also, I wasn’t sure at that throw distance what it would look like because in the summertime we’re fighting with dusk issues but I’ve been impressed that an LED source is that intense.” With CMY color mixing and comprehensive FX package that includes framing, Proteus Maximus can be used as a profile, beam or wash light. Housing a 5.5- to 55-degree zoom and 950W White LED engine, its 50,000 lumens of brightness can cut through at great distances.

Layers of light
With three different zones of the tree to light – rock, trunk and canopy – Rose worked in layers of light to create visual depth, working with intensity, color and pattern. Elation Rayzor 760™ RGBW washlights with zoom are located in planters along the bottom of the rock face and used to uplight the tree and underpart of the canopy in layers of color. Color-changing SixPar 200 IP Pars mounted within the rock base uplight the canopy in greens or blues while the pole-mounted SixPar 300 LEDs add more shades. Additional layers of color emanate from Acclaim Lighting Dyna Accent Mini architectural fixtures hidden along the base of the tree while color-mixing Lekos project onto rocks and the trunk for added texture. The layered lighting looks work in tandem with the 650 butterflies in the canopy, whose every wing can receive pixel-mapped color and effects.

The beginning of all four experiences is the same with tree roots growing up along the rock and vines moving up the trunk but each experience boasts its own visual delights - autumn ambers and yellows with falling leaves, a powerful summer storm with lightning, or the falling snowflakes of winter. Rose says she used every feature of the Proteus when creating the scenes. “I used the framing shutter all the way, and then opened them up straight horizontally so it looks like the roots are climbing up the rock. I put the animation wheel behind a gobo and got the focus right so it would look like it was raining down the trunk. Even the movement of the light was very smooth.” Rose created her lighting design in a visualization suite, did all the programming and time coding herself, and then recorded it into a show control system for playback.

Between experiences
Each experience is a few minutes long with ample time between shows to enjoy the majesty of the area and the beauty of the tree itself. “During the shows there is a lot of color but for our static look in-between shows I wanted it to look like a real tree,” Rose explains. “I keep the gobos out of focus to give it some depth and contour and on the rocks I added a bit of steel blue to make it look like a real rock. On the trunk, I added a bit of amber and for the canopy, I added a bit of green. I was basically painting the tree with light and accenting the natural colors that were in it to make it look real.” Only the LED Pars and Lekos are used for the static looks, she says. “Then when the show starts and all the vibrant colors appear and the movement starts, it’s a real wow moment!”

Rose commends Imagination House, who she says “did an amazing job creating and producing the experiences. The music by Mike Avila is fantastic as well.” The Wildwood Grove Tree experiences at Dollywood opened last June and have proven extremely popular not to mention a perfect spot for photo ops. 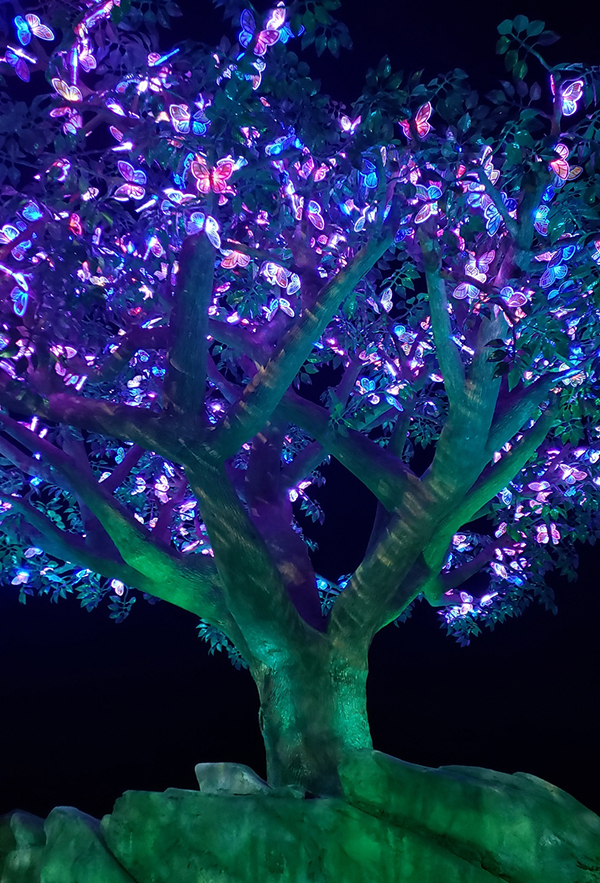