Lightswitch, 4Wall and Elation team up at 2019 LA Auto Show

Design group Lightswitch first turned to Elation Professional’s Fuze Wash 575™ LED white light luminaire in 2017 and again utilized the auto show-optimized moving head to light three top auto manufacturer booths at the 2019 edition of the LA Auto Show. “The Fuze Wash 575 is one of a very small number of automated LED fixtures that we use extensively in the auto show market,” states Chris Medvitz, Partner and Principal at Lightswitch. “Because of its light weight, feature set and price point, it has very quickly become a workhorse in automotive lighting for shows.”

Held November 22 – December 1 at the LA Convention Center, Lightswitch used the Fuze Wash 575 on the Subaru, Nissan and Infiniti booths at this year’s LA Auto Show. Medvitz designed the booth lighting working with booth designers George P. Johnson on the Nissan and Infiniti booths, and designers EWI Worldwide/Hansen Productions on the Subaru booth. Some 775 Elation Fuze Wash 575 and 75 Elation Artiste Picasso fixtures were used on this year’s LA Auto Show, supplied by 4Wall Entertainment. Other booths lit using the Fuze Wash 575 include Honda, Volkswagen and Acura with the latter also utilizing the Artiste Picasso. 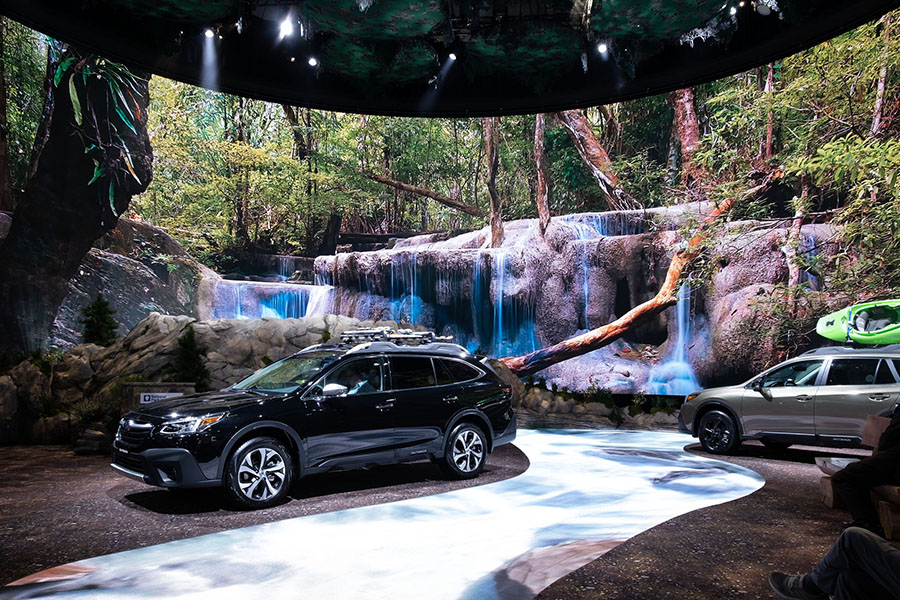 LED-based evolution
Auto manufacturers demand that their vehicles be displayed in the best possible light and for optimal presentation that means daylight color temperature light. For years, that was the work of conventional HMI or automated MSR fixtures. “But the more full featured lights were designed and built for other market segments like concert touring,” Medvitz says. “Then, about 10 years ago, there came viable options in automated daylight fixtures like the Elation Design PAR 575 with very simplified feature sets that were more cost effective. Now we had fixtures that weren’t too heavy, that didn’t take a huge amount of power, and allowed us to remote focus and turn on and off remotely. The Fuze Wash 575 is the LED-based evolution of that.”

Some 96 of the units were used on the Subaru booth for launch of the new 2020 Subaru Outback, an immersive National Park-themed environment that Lightswitch helped design. “The Subaru booth touched on all of the senses. We used a lot of lighting on the exhibit properties and scenery, more than in other booths simply because there was so much of it,” Medvitz commented, adding that on a typical booth about 75% of the lighting goes to illuminating the vehicles. “The tone and hue of the lighting shifted in conjunction with an hour-long multimedia program, to visually represent the passage of time from early daybreak to bright mid-day, to saturated sunsets.”

Elation’s strong tradition of lighting auto exhibitions resulted in design of the Fuze Wash 575, a PAR moving head with high-output 350W Cool White / Daylight COB LED engine. Medvitz addresses the advantages of using the LED source. “When we used a discharge lamp, one of the features that was dropped for cost efficiency reasons was the dimmer. Being able to dim the fixtures now is a great benefit because it allows us to do more in terms of controlling brightness, not necessarily on the vehicles themselves but to balance the light levels on branding elements like graphics and logos, or other elements like scenery, information counters or hospitality setups. Another nice feature is the zoom, which was never something we were able to control with earlier fixtures unless we changed lenses at the shop. Being able to zoom gives us a lot more flexibility.” 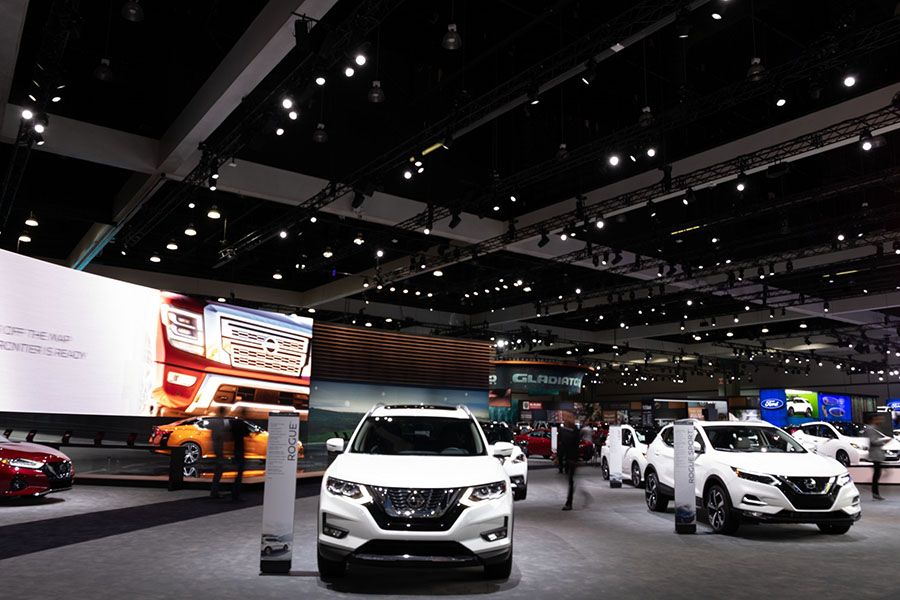 With aesthetics essential and high demands placed on light quality, Medvitz says the caliber of light coming from the Fuze’s LED source is superior to what he experienced with MSR-based fixtures. “As a base light it’s superior, is a bit cleaner and has a higher CRI. With any discharge-lamp-based product, you see variation over the lamp life so unless you have a rig with all new lamps you never get consistency because the CRI varies over the life of the lamp. With the Fuze Wash 575, we don’t see that variation in the lighting which is another benefit.”

Weight played a major factor as well, the designer says, as the LA Convention Center has a relatively low weight capacity due to building and earthquake zone restrictions and the Fuze Wash 575 weighs in at only 27 pounds. “In the North American market we focus on four major auto shows and two of those shows – LA and New York – are in venues that have pretty significant weight restrictions where we are often up to the limit of what it can handle. A fixture that we are deploying 100s of that has a 30% decrease in weight certainly adds up.”

Another Elation fixture that Medvitz turned to at this year’s LA Auto Show is the Artiste Picasso™ LED Profile moving head. Used on the Nissan booth to treat color onto curved graphic elements while framing light away from video screens, louvers and vehicles, the Picasso is a light that Lightswitch has employed ever since it came on the market. “It’s a great all-around medium-sized framing profile and a fixture we go to a lot for corporate events. The LED engine gives us consistency in color rendering as well as low maintenance,” Medvitz concludes.